Are you tired of drawing on or filling in your eyebrows every day? Do you find that your eye makeup is always smeared or that your coffee cup is full of lipstick? Are you looking tired and washed out? Think of how much more youthful and alert you look when you wear a little makeup.

Most women love looking prettier but either don't have the time, skill or energy to do so. Perhaps you have alopecia or have undergone chemotherapy, have shaky hands, or just want to look your best. It is "color" that makes your face look alive and, unfortunately, as we get older, our "color" seems to "disappear".

Permanent Cosmetics is the revolutionary technology to look your best 24/7. It is a safe, natural-looking and affordable alternative to daily makeup application. Custom blended pigments are "artfully" and "skillfully" implanted lightly into anesthetized skin to help you look your best all day, every day and doesn't smear or wash off! The results are "amazing" and can be enjoyed for years.

For over 40 years, Maggie has been involved in the field of art, mainly drawing the human form (and in particular, the female face). Utilizing a variety of media, she has been acknowledged in many newspapers for her creations and has always excelled in the area of uniqueness.

Maggie was introduced to permanent cosmetics over 20 years ago and realized that this was just another form of art, only on human canvas. She began her training and apprenticeship under the supervision of nationally acclaimed Rosie Wells at the Clinic of Cosmetic Surgery in Milwaukee, Wisconsin and received her certification in 1998. In 1999, Maggie opened her own business in Eau Claire, Wisconsin. Soon after, she was again acknowledged on WQOW channel 18 news, the Eau Claire Leader Telegram and other publications. Maggie is also the winner of the national Eyebrow Design competition sponsored by Dr. Linda Dixon, founder of the American Academy of Micropigmentation in Hawaii.

Whether you want eyeliner, eyebrows, full lip color, areola pigmentation, scar camouflage or corrective work, Maggie offers complimentary consultations so that you can see what it would look like to "WAKE UP WITH MAKEUP!!!!". 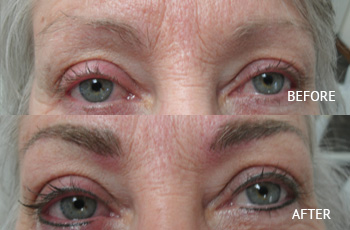 Permanent Cosmetics is the revolutionary technology to look your best 24/7. It is a safe, natural-looking and affordable alternative to daily makeup application.